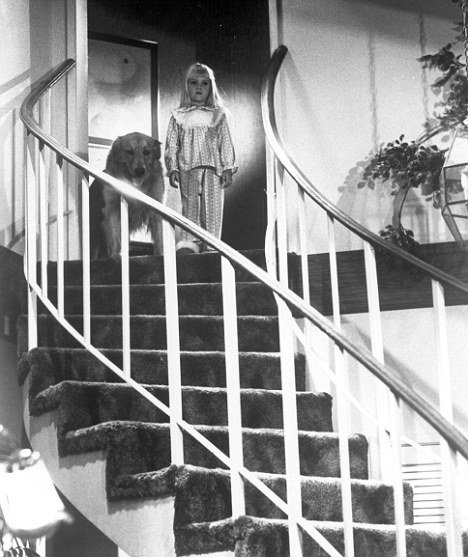 In early 1980, Steven Spielberg collaborated by mail on a treatment with Tobe Hooper while Spielberg was shooting "Raiders of the Lost Ark." The treatment, originally titled "Night Time" (perhaps a derivation of the aborted "Night Skies" project), was a ghost story set in the suburbs. Several months after the initial 11 page treatment was written and sold to MGM, Spielberg added about 20 more pages which further fleshed out some of the story's initial ideas. It's very interesting to note which elements of the finished film were there from the very beginning. However, more notable are the things which didn't end up in the shooting script at all. In fact, most of the scenes in the amendment pages are completely different from what would eventually end up on screen. I would argue that what was added/changed later on in the actual screenplay made the story much better. Of special note, the treatment did NOT include: the tree, the clown, the bodies exploding up from under the house and yard (though they were in the pool, like the finished film), and Carol Anne is not abducted.

As excellently summarized by Devin Faraci (at http://badassdigest.com/2012/01/08/schlock-corridor-poltergeist-1982-part-ii/):

Spielberg and Hooper worked together on a treatment called Nighttime; this version has the Freelings with four children, one of whom is Carol Anne, but the rest are different. They live in a planned community that surrounds a mall, which is the center of life. The ghosts don’t really manifest physically, and nobody gets kidnapped - instead the ghosts possess members of the Freeling family, most notably Steve while he’s [having sex with] his wife (Nora in the original treatment). And she loves it!

The source of the haunting turns out to be a group of pioneers massacred by Indians a hundred years before; the community has been built on their bones. The eldest Freeling daughter had discovered and become obsessed by a record of pioneer songs, and it seems like that triggered the problems. The haunting of the Freelings is a bit more low key - spectral forms under blankets in bed, furniture moving about, a long ghost kiss (complete with a handprint on Nora’s face, not unlike The Entity). The treatment has no real ending, but one proposed concept is that the haunting doesn’t end with the Freelings and spreads to all the neighbors. Eventually the community is evacuated and as the residents flee they see ghost fires starting behind them, burning the suburb to the ground. That’s a pretty definitive anti-suburban statement.

The Freelings, the suburbs, Carol Anne, a lot of haunting surrounding TV and an early version of Tangina (called Tagina) are all in the Nighttime treatment. But the hauntings are pretty different, and there’s one killer haunting set piece - a babysitter tells the Freeling children a ghost story, and the ghosts in the house one up her the whole way through, sending her screaming from the home - that’s missing from Poltergeist.

The big missing piece is Carol Anne’s abduction; in the finished film this is the center of the story in terms of emotion and theme, and without that abduction Nighttime feels like it’s grasping for a reason to exist.

The Nighttime treatment became It’s Nighttime, which still wasn’t exactly the Poltergeist that we know now. Carol Anne remains unabducted, a possessed vessel for the spirits of dead settlers massacred by Indians. And many of the familiar scenes are still not there, although this version also has some cool stuff that never made the final film (including a scene where Diane/Nora takes a bath and the tub fills with blood).

The full treatment can be read at the Internet Movie Script Database here:
http://www.imsdb.com/scripts/Night-Time-(The-Poltergeist-Treatment).html